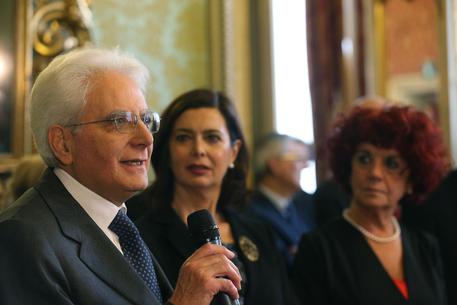 Italy’s new president is Sergio Mattarella. The Constitutional Court justice and former minister was elected in the fourth round of voting for a new head of State.
Sergio Mattarella, 73, was the candidate of Prime Minister Matteo Renzy, a nomination which has angered opposition rival Silvio Berlusconi, who says that Renzi has broken a pact on reforms by not proposing a joint candidate.
Mattarella won unanimous support from Renzi’s party, as they oppose the reform alliance with Berlusconi.
Sergio Mattarella will replace Giorgio Napolitano who resigned earlier this month.
Who is the new Italian President of the Republic

(ANSA) – Rome, January 31 – Sergio Mattarella was elected Italy’s new president on Saturday. The 73-year-old, a former member of the once-dominant but now-defunct Christian Democrat (DC) party, becomes Italy’s 12th president and replaces 89-year-old Giorgio Napolitano, who resigned as head of State this month.
Mattarella, who will be sworn-in as Italian president in the Lower House at 10:00 local time on Tuesday, said his first thoughts after being elected were devoted to “difficulties and hopes of the citizens”.
“That alone is enough,” added the new head of State after being formally informed of his election at the Constitutional Court. Lower House Speaker Laura Boldrini had proclaimed Mattarella Italy’s new head of State earlier, saying he won 665 votes of the 1,009 presidential ‘grand electors’ – lawmakers from both houses of parliament and regional representatives. The announcement was greeted by a long standing ovation, although members of the 5-Star Movement (M5S) and the rightwing Northern League did not join in. Mattarella, who will now have to leave his post as Constitutional Court justice, was the candidate of Premier Matteo Renzi’s centre-left Democratic Party (PD) and had the backing of several groups.
These included the opposition Left, Ecology and Freedom (SEL) group and the New Centre Left (NCD) of Interior Minister Angelino Alfano.
The M5S candidate, magistrate Ferdinando Imposimato, came second with 127 votes. Three-time premier Silvio Berlusconi’s opposition, centre-right Forza Italia was opposed to Mattarella and ordered its members to cast blank papers – 105 of which were counted.
The right-wing Brothers of Italy (FdI) and Northern League parties voted for journalist Vittorio Feltri, who got 46 votes. The first three rounds of voting for a new president, when a two-thirds majority was needed, were inconclusive on Thursday and Friday after the PD and FI told their members to cast blank papers.
On Saturday Renzi sent a text message thanking his PD after Matterella’s election, which should help bury the memory of the debacle the party endured in the 2013 presidential vote.
On that occasion two candidates proposed by then-PD leader Pier Luigi Bersani were scuppered by internal revolts, forcing Bersani and chiefs from other parties to beg Napolitano to start an unprecedented second term.
Napolitano agreed to avert a crisis, but stressed that he would not serve the whole of his second seven-year term. In Italy the president is a figurehead of national unity and the arbiter of Italian politics. Earlier this week Berlusconi has said that, by choosing a candidate he is unhappy with, Renzi had broken the terms of the so-called Nazareno Pact they struck last year for a new election law and a revamp of Italy’s slow, costly political system.
Mattarella once resigned as minister rather than vote a broadcasting law that favored Berlusconi’s Mediaset empire.
But on Saturday, three-time premier Berlusconi sent Mattarella congratulating him, ANSA sources said.
Mattarella became a founding member of Renzi’s PD years after the DC folded, and is also famous for being the architect of Italy’s last-but-one election law, the so-called Mattarellum.
Mattarella’s brother, Piersanti Mattarella, also a DC man, was murdered by the Mafia in 1980 while he was governor of Sicily. His father, Bernardo Mattarella, served as a DC cabinet minister several times in the 1950s and 1960s.